Eleanor Broadbent, Trustee at Support After Rape and Sexual Violence Leeds, blogs about her experiences of pounding the pavements and fundraising for the charity… 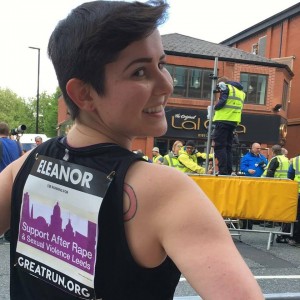 Puff, pant, puff, pant. I’m doing it! I’m running a 10K and I haven’t followed any of the training advice in the booklet! Anybody that knows me knows that Zumba is my bag and I’m no runner. But something strange has happened over the past six months and I’ve been spending time outdoors clocking up the jogging kilometres, as well as cash for Support After Rape and Sexual Violence Leeds (SARSVL).

In May 2016 I decided to take part in the Great Manchester Run and seek sponsorship to fundraise for SARSVL. I set the target at a modest £150 but quickly doubled it when I realised how enthusiastic and generous people were with their donations after a couple of days. I was a bit apprehensive about asking for money but quickly relaxed in to it, publicising my JustGiving page whilst talking about SARSVL to family, friends and colleagues in my networks. I eventually raised almost £400, with some of the money coming from strangers that I’ve never met via Twitter. That cash covers a lot for a small charity in Leeds. We can buy specialist Helpline equipment with that. We can reimburse our volunteers for their travel expenses. We can pay our internet bill and we can buy supplies to raise awareness about rape and sexual violence in across the city.

Speaking out about the rape and sexual violence that women and girls experience every day is what spurred me on through Salford in the lashing rain of the 8th kilometre.  It was fantastic to represent a small, independent feminist charity in a sea of much larger and well-known national organisations. I printed out our logo and pinned it to my running shirt with pride and I’m glad that everybody saw it.

I’m joining the St. Gemma’s 5K Colour Run later this year and a women-only Leeds 10K in October. I’ve even been on the treadmill to road test some appropriate footwear (I did my first 20K in aerobic trainers – not recommended) so I’m ready to go. I’ve had lots of support and I can’t wait to see other folks running for SARSVL in the future!

Inspired? Why not find out more about running in aid of Support After Rape and Sexual Violence Leeds?

Your call should be answered immediately during our helpline opening times, unless we’re on another call. If we’re closed or on another call you can leave us a message and we’ll call you back.